What marketeers can learn from ice hockey

Ice hockey is as much a part of my family as the thick Irish blood running through our veins. My husband played in college. My youngest son slid into skates as comfortably as I slide into my loafers. My oldest son keeps us traipsing from rink to rink about five nights a week during the season with trunks full o’ hockey stench that physically stings your nose. And the stucco on the front of my house is patched regularly on account of puck holes.

In hockey, the offense drives the puck—six ounces of flat, round, vulcanized black rubber—down the ice and into the net of the opposing team. The defense, naturally, tries to keep the puck out of the net. The team that lands more goals wins—pretty straightforward.

Often, I think the simple rules of hockey can help us reach marketing goals. Here’s a quick breakdown of a few facets of the game—and how they might inform your marketing projects.

When attacking team players cross the blue line into their zone before the puck or puck handler does, it’s called “offsides.” When the referee judges this was intentional, play is halted and the puck goes all the way back to the defensive zone at the other end of the ice. The players are obviously just eager to score, but being too eager in this case prevents them from reaching their end goal.

Client projects also have an end goal: to register 47 people for the next webinar, to promote awareness of a product or service, or even just to gather email addresses for later use. Rushing not only makes for a choppy process, but often makes meeting the goal impossible.

Slow down, clear your head, and consider the pitfalls you could encounter and how to combat them. Hover behind that blue line for a minute. You’ll never be mad about being overprepared for a challenge.

Don’t waste a lot of effort yelling to the wrong group. If you want to register 47 people for your webinar, make sure you know who those 47 people are. Keep the goal in sight, your project plan in front of you—and don’t get ahead of the puck.

Keep your goal in sight—don’t get ahead of the puck.

How some players control the puck really is an art form. But to put it plainly, you can stickhandle till the cows come home, and you won’t get a single goal. You’ve got to shoot! It’s that simple.

Answering a client’s needs can sometimes be a direct shot, too: If they need a place to post and collect information online, we build them a microsite. Other times the client’s challenge is one you’ve not solved before, and it’s not as easy to see your shot.

When I’m confronted with this, I focus on what I know. Never mind what I think—what do I know right now? What’s been successful with other client projects? How can we adjust it to fit the current situation?

The point is action. Start firing off what you know in your brainstorming sessions. Don’t stickhandle around not having solved this specific problem before. It’s paralyzing. Like Wayne Gretzky, “the Great One,” said, “You can’t score if you don’t shoot.”

With a new challenge, focus on what you know.

“Icing” is when the puck is shot across the other goal line from behind the center line with no one touching it along its way. The idea is to move the puck away from the offensive players, getting them out of scoring position, and giving the team time to regroup. Simply put, it’s a time killer.

Similarly, it can be useful to take the time to adjust your marketing plan based on new information. I can’t begin to tell you the notebooks I’ve filled with “ABC didn’t work; DEF was much more effective.” I’ve put these plans into play over and over again. Time spent revising marketing plans will benefit me and my clients for years to come!

Take the time to adjust and refine.

So, there you have it:

I’ll see you at the rink!

Kelley is a multitasking maniac who encourages her overstressed customers to, “Slow down, take a breath, and tell us EVERYTHING!” She enjoys brainstorming with peers and helping clients out of tight situations. Kelley loves hanging with her husband, 4 kids, 2 beagles, and Chubs the bunny. Her happy place is the ocean, but she lives in the Arizona desert. (Really?) 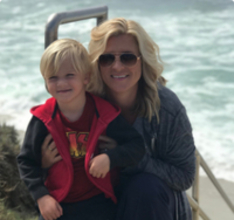 Chicken or egg? Copy or design?